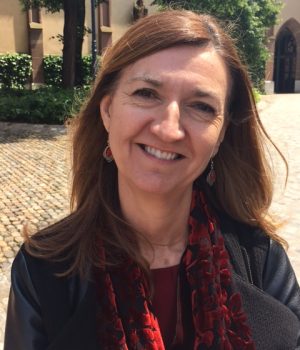 Lourdes Ortega is a Professor in the Department of Linguistics at Georgetown University. Her main area of research is in second language acquisition, particularly sociocognitive and educational dimensions in adult classroom settings. She is originally from southern Spain, where she also received her first degree in Spanish Philology. She studied abroad in Germany, lived in Greece for 7 years as a teacher of Spanish, and relocated to the United States in 1993, where she did her doctoral studies and where she has rooted her academic career. Her bilingual life in English-Spanish is enriched by several other languages, and particularly Greek, which was once her strongest language.

A widely published scholar and frequent plenary speaker at international conferences, Ortega is best known for her award-winning meta-analysis of second-language instruction in 2000, her best-seller textbook Understanding Second Language Acquisition(2009, translated into Mandarin in 2016), and for championing a bilingual turn in SLA. In her most recent work, she has called for the addition of social justice as a necessary cornerstone of disciplinary transformation. Her keen interest in usage-based linguistics, bilingualism, and social justice is reflected in recent articles in CALICO Journal (2017), World Englishes (2018), and Working Papers in Educational Linguistics (2018). Her latest book is The Cambridge Handbook of Bilingualism, co-edited with Annick De Houwer (Cambridge University Press, 2019).

Ortega was co-recipient of the Pimsleur and the TESOL Research awards in 2001 and has been a doctoral Mellon fellow (1999), a postdoctoral Spencer/National Academy of Education fellow (2003), a senior research fellow at the Freiburg Institute of Advanced Studies (2010), and an Advanced Research Collaborative Fellow at the Graduate Center, City University of New York (2018). She was Journal Editor of Language Learning for the five-year term of 2010-2015 and now serves as Associate General Editor on the Board of Directors of the University of Michigan’s Language Learning Research Club.